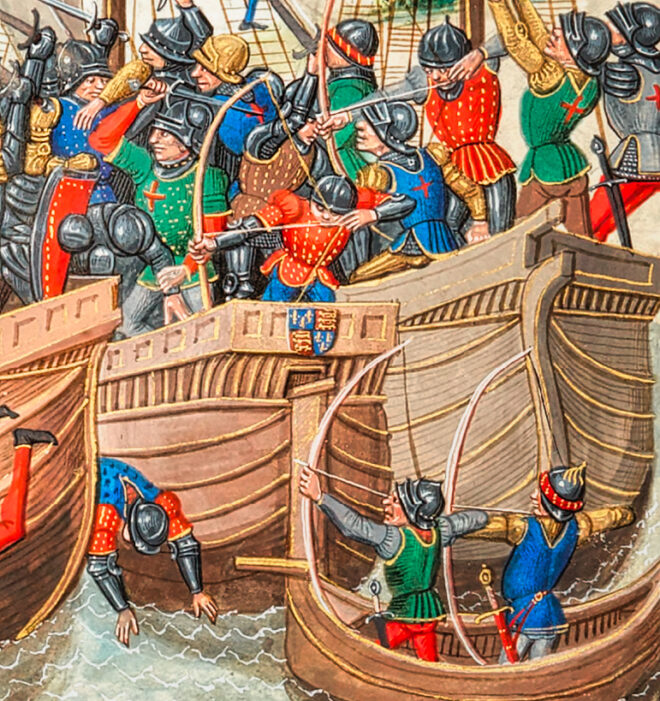 The study ”Maritime military archery: Bowmen on European warships, 1000–1600” by Henrik Arnstad and Abigail Christine Parkes is now available for free download as a PDF, either on academia.edu or here.

First published in the maritime history anthology ”Facing the Sea : Essays in Swedish Maritime Studies” (Nordic Academic Press, edited by Leos Müller and Simon Ekström), the study has received praise for opening up a new field of military history and maritime history.

The article has been praised by leading historical archery expert Hugh D.H. Soar who, writing for the Society of Archer Antiquaries, agrees that there has been a considerable research gap concerning the naval use of bowmen:

Naval warfare studies generally reduces the use of archers on warships to a prelude to ”real” battle. Military archery studies, meanwhile, are always focused on land warfare. … However, as the study shows, archery was often the key component in military engagements at sea, long after the Middle Ages ended.

Given the significance of the Mary Rose archery artefacts, it is important to think more about their use in a naval context. All too often they are referenced in order to support theories about archery in the land battles of previous centuries. Naval archery is worthy of deeper study and this book provides a very good stimulus for that.

Here at Bow Towers, we were excited to receive a book that featured one of the least explored areas of study: maritime archery. … written by Henrik Arnstad and Abigail Christine Parkes, about naval uses of archers, a history spanning three millennia. While there are a few famous stories about bowmen on ships, such as the tale of the Japanese warrior Minamoto no Tametomo, the authors have concentrated the study on European waters between 1000 and 1600, the peak of naval archery.

For all received kind words we are mot grateful! If you want more than just the archery study, you can buy the entire book on amazon.se.